Every year we go to Origins, and every year we try to look for the smaller game manufacturers to see if we can find some hidden gems – this past year I tripped across Shoot Again Games and not only picked up one of their games, but two!

But first… check out the fabulous artwork here for Bigfoot vs Yeti!

The basic strategy is much like rummy, where you pick up and discard cards to get as many as you can of one type – worth different points based on the cryptid involved. The different fonts and colors help keep the cards organized in your hand and the opportunity to twist the game to your advantage by “mounting an expedition” give gameplay a nice twist… but wait, isn’t the game called Bigfoot vs. Yeti?

The journalist (you) are caught between the two mighty cryptids as they fight for domination! The cards are two-faced, so you can steal either from another player to add to your hand and your point total.

Shoot Again Games has come up with an excellent video to show gameplay – it’s short and easy to learn!

Now, is the game perfect? Depends on how you view it – if you’re looking for a deep backstory and complex gameplay that’ll take multiple tries to get it right, probably not… but with the rummy game mechanics in play, this is a great way to spend a few hours having fun, enjoying the great artwork, and having a good time hunting the Jersey Devil… or having it hunt you!

If you’re looking to support a small game manufacturer that’s putting out good, reasonably-priced games, check out Shoot Again Games and Bigfoot vs Yeti! We’re already planning to stop by their table again this year at Origins and see what’s new – and encourage everyone to do the same!

It’s been a while since I did any game reviews and I’ve decided to get back into it – with one of my new favorites – Maiden’s Quest by Wizkids! I snagged this last year at Origins – actually, I ran to the booth the minute the dealers room opened to buy a copy, because I was so excited about it!

And I wasn’t disappointed… so let’s take a look!

Maiden’s Quest is a solo game, with a small option for doubles play, where you take on the role of a maiden trapped in a tower… but you’re not going to sit by and wait for someone to save you! Hells, no! You’re breaking out and taking everything you can to fight your way down to the bottom and defeat the big baddie – or escape through an exit door!

Building your deck is as simple as picking a princess and a bad guy – directions on the back of each card dictates what barriers and bonuses will go into your final deck. Zombies, vampires, allies and useful weapons all get shuffled together and then you begin!

Look at the first card and see what you have – game play consists of slipping the first card to the back until you hit a big baddie, or a princess that allows you to upgrade some of the cards behind it. The cards have wonderful artwork, and can be flipped and/or turned to allow each card to represent FOUR levels of usefulness. Some are spells, some life points, some weapons and upgrades… and some provide exits from the tower!

Combat consists of first deciding if you want to fight – if you choose not to, you can take a penalty listed on the card and go through the deck, flipping life point cards over to take damage. But if you do decide to fight, fanning out the four cards behind the enemy gives you the arsenal needed to take him/her out. If you do, you flip the card over and gain whatever’s on the back. When you reach the end of the deck, you shuffle them and begin again – special cards signal when you’ve gotten to the end and what level you’re on, affecting the level of bad guys and girls you’ll be facing.

I’m simplifying it a bit, because it’s a complex game to master. I have to admit, when I raced back to my hotel room to play, I was annoyed and disappointed at the rule booklet included in the box. Hopefully they’ve done a better job with newer versions, but I ended up watching the VERY USEFUL Youtube videos on how to play. But once I got past the wobbly instructions, I found myself addicted to the point that I purchased a small black bag so I could carry my current deck with me everywhere – allowing for the chance, small as it is, that I could meet someone and gain a treasure offered by a card in the game allowing for someone to sign off on the card for duo play.

I do highly recommend you go straight to the videos – they’re well done and answer a lot of questions you’ll come up with – I really found them much more useful than the game rules!

And there you go! An excellent solo play game, once you get past the badly written rulebook – and one where the woman doesn’t sit back and wait to be saved! Four out of five big dragon claws up for this great card game!

I received word the other day that the Library at the Origins Game Fair was being shut down – for a number of reasons, which I’m not going to go into here (and disagree with, to a degree) and I’m going to miss it. Even though last year I wasn’t invited to participate (along with many of the regulars) Origins is going to be missing a good source of entertainment.

But maybe it’s all for the best – last year I got to attend as a gamer, and it was a hell of a great time. I discovered the Call of Cthulhu RPG and fell in love with it, so much that I got all the sourcebooks and began running sessions for our small group, giving my hubby time off from his Pathfinder campaign. It’s a great game and if you’re looking for a new RPG, I heartily endorse it!

We also got to have fun finding new games and that’ll never get old – after over a decade of attending the convention without missing a single year, we always find something new and exciting. Every year we plan around our Columbus trip, making hotel reservations a year in advance.

And it was good to be at the Library – I made some good sales, met some wonderful people and chatted with new authors, encouraging them to keep on writing. It’ll be sad for them to lose the Library, but maybe it can be resurrected in the future. There were a lot of flaws with the current system and I’d like to see those addressed if someone brings it back to life.

But we’re already planning for a week of great gaming – and while I’ll miss selling books, I’ll get in more gaming – and who can complain about that?

Tuesday nights are usually game nights for us – and last night we had a rousing game of Elder Sign from Fantasy Flight Games. We got this game for Christmas and it’s available at many Barnes & Noble stores, so it’s easily accessible if you’d like a copy. 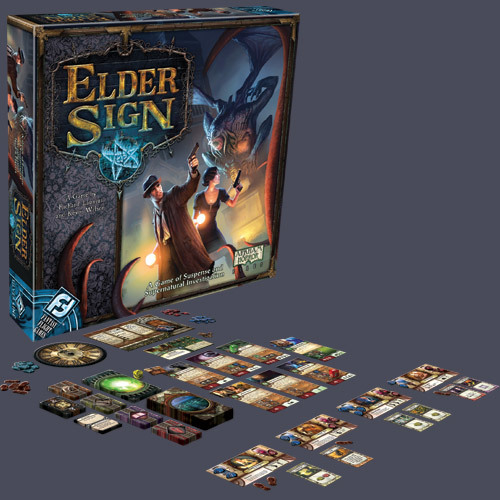 In a nutshell it’s a dice game set in the Lovecraftian universe, with monsters and insanity galore. Using a lot of the same characters and artwork from other Fantasy Flight games in the same vein you and your friends play the part of investigators seeking to collect enough Elder Signs to seal away an Old One seeking to break through.

This game plays well with any number of players and you can also play solo – if you dare! I was lucky enough to be chosen to play this as a Featured Guest at Origins Game Fair in June and many of the players hadn’t ever seen the game before but within minutes we’d all picked it up and raced through to a glorious victory against the Ancient Ones!

Elder Sign has also been featured on Tabletop in a great and funny video! If you’re looking to see if this game is for you I highly recommend the video.

Recently an expansion was released, correcting some cards and adding in two more dice – last night we played using the expansion and managed to bring down The Big Guy (whose name I shall not speak!) with only one investigator losing his mind/dying. Not too shabby.

If you’re looking for a fresh look on the Cthulhu mythos and a great dice game to boot, I highly recommend Elder Sign. You can find it almost everywhere and for $35 it’s a game that gives plenty of variety and replay value for your buck!

Another day, another posting about a game the Wookie and I have discovered and LOVED! Today I give you The Duke, from Catalyst Game Labs!

This is one of those games that seems simple but is deceptively evil. The Wookie played a demo at Origins and grabbed a copy right there. It was originally funded via Kickstarter but is well on the way to being on the shelves of a lot of game stores in my opinion.

Imagine a game much like chess – except the options for each piece change with each turn! With The Duke the goal is to capture the opponent’s Duke, as in chess – but every time you move a piece you flip it over, showing a whole new set of options for that piece! Some pieces can destroy others at distance, some can jump over others, some can command others in lieu of their own move… the options are endless.

Expansions are already on the way using a variety of themes from Musketeers to Robert E. Howard characters, giving you an almost never-ending variety of options for each game.

One thing I love about this game is the wooden pieces. Call me old-fashioned, but I love the feel of varnished wood in my fingers and with all of the pieces being made of wood it just feels lovely and adds to the medieval feel of the game. Strategy-wise it takes a lot more planning than with a chess game with different pieces offering different options as well as changing with each time they are moved.

If you’re looking for a twist on chess check out this highly addictive game from Catalyst and see what you think – I suspect it’ll be a fast addition to your game shelves and get a lot of use!

What did I say?