There’s been a lot of great games coming out of Kickstarter and I love when we either get them in the mail ’cause we backed the faboo concept or we find them on the shelves of our local game store. Such is the story of Ninja Dice from Greenbriar Games!

First… I love the packaging. If you’re like me and love, LOVE to have wee ‘lil games stacked up to the ceiling this is perfect. The carrying case is an actual large dice bag looking like a Ninja… which makes this one of the most portable games around! Easy to pack, easy to carry and store!

But let’s move onto the actual dice inside… the idea is that you and your friends take turns building houses and then breaking into houses using your faboo ninja skills! At the same time that you’re trying to break in your “buddies” are trying to thwart you by stealing coins or worse, snatching away valuable time you need to complete your task!

The concept is much like Dungeon Roll or Age of War, a game I reviewed earlier – you need to roll certain combinations in order to defeat the enemy house. It might have a ton of locked chests, a group of guards or residents standing by to foil your stealthy plan. In order to defeat them you use your dice to roll throwing stars, stealth tokens, lockpicks, the ninja symbol which is a wild card since we ALL know Ninjas can do ANYTHING or… the fortune symbol which allows you to multiply another symbol. This comes in handy when you’ve got, as we did in a game last night, eight guards and two residents standing by to catch you!

One of the aspects of this game that make it stand apart from the other dice games, IMO, is that the other players also have something to do during your turn. Each other player throws a special dice during your dice-throwing turn and can either steal coins from you (earned at the end of your turn when you decide how much of the house you’ve been able to defeat, if not all) or an hourglass which lets you know your time is running down. Four hourglasses and your turn is over and you lose any coins you might have earned up to that point.

The game also increases in difficulty during the three rounds that makes up a full game. At the start the enemy house has only four dice, making it rather easy to defeat with your five skill dice… but the house gains an extra dice for each new round, growing to five and six dice. Suddenly it becomes harder to clear the house without throwing some fortune symbols and multiplying your skill dice. You can reroll at any time but the longer you roll the more likely you’ll have your enemy players roll hourglasses and/or steal your coins – and at the end of three rounds it’s all about the money and how many coins you’ve earned. You earn coins by each dice of a house you defeat and another coin if you do it without killing, making the stealth factor a major player. Lovely plastic coins come with the game in three colors for those of us who love our copper silver and gold… 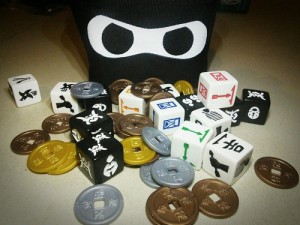 We really enjoyed Ninja Dice and plan to pick up the expansion which gives location cards to make the game a bit more fun – but the basic game is very playable and very addictive as you fight your fellow players while trying to defeat the enemy house. Love the packaging and the portability makes Ninja Dice a game we’ll be taking with us to introduce friends to dice gaming!

One thought on “Game Review: Ninja Dice by Greenbriar Games”

Error: Twitter did not respond. Please wait a few minutes and refresh this page.

What did I say?